Nicknamed “Pink City” because of the colors of its pink sandstone, it means stone. It is not a city built with stone, but literally carved and carved out of it. It was founded by the Edomites in the 7th century BC, a century later, invaded by the Nabataeans, the city prospered thanks to its location on the trade route between Egypt, Syria, Arabia and the southern Mediterranean. In the 6th century AD, trade routes changed, its inhabitants abandoned the city, and sandstorms and earthquakes caused it to fall into oblivion. At the beginning of the 19th century it was rediscovered and included in the list of World Heritage Sites in 1985.

The Petra earrings and ring symbolize the trail of a sandstorm and the footprint of an excavation.

All pieces are manually designed with clay and produced in gold-plated silver.

It is not advisable to use hair spray, perfumes or creams directly on the jewels. 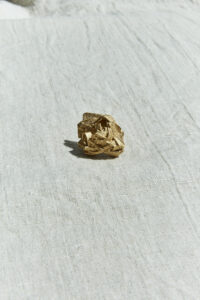