Since she was eleven years old, Malala Yousafzai (Pakistan, 1997) has been an activist, detailing her life under the occupation of the Talibans. She was nominated for the International Children’s Peace Prize and, despite her parent’s warnings, Malala has always given interviews in print and on television. On October 9, 2012, at the age of 15, Malala was riding her school bus home. A young armed boy attacked her, and a bullet struck her in the face. She was quickly transferred to England, where she has lived since her recovery, and from where she travels around the world fighting for the defense of early childhood education and equal rights for women. Among other awards, she received the Nobel Peace Prize in 2014 at age 17, becoming the youngest nominee in the history of the award.

The Malala bracelet is a tribute, a celebration of her bravery, an open prison, a liberation, and a fight for rights.

All pieces are manually designed with clay and produced in gold-plated silver.

It is not advisable to use hair spray, perfumes or creams directly on the jewels. 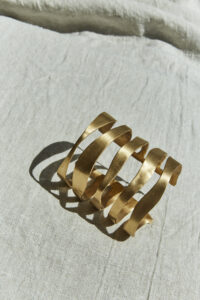